The development of the SED-S, a shorter version of the seo-R², started in Berlin in 2015. By no means this replaces the comprehensive seo-R², but acts more as an aid for classification and research in order to facilitate consultation and research at European level. A year later, the NEED group came back together, led by Dr. Paula Sterkenburg and Dr. Tanja Sappok.

Meanwhile, the SED-S was given its final shape divided in eight domains: Dealing with own body (1), Dealing with significant others (2); Dealing with changing environment; object permanency (3); Differentiation of emotions (4); Dealing with peers (5); Dealing with materials & activities (6); Communication (7); Regulation of affects (8). Each domain consists of five observable items per phase, resulting in a total of 200 items.

That is why the main focus during the upcoming work year will be validation across the various participating countries. A substantive discussion was about conceptualization of the developmental approach. This broad, comprehensive concept is not in total represented by the term “emotional development”, as other aspects (c.f. domains above) are included as well. Alternatively, the introduction of the term “emotional functioning” was discussed, however, no general agreement was achieved within the group for this term as well. Therefore, the NEED group decided to dedicate the next NEED meeting in 2017 to this topic, where developmental psychologists and scientists will be invited to exchange their ideas.

Aside from giving more shape to the SED-S, several ideas were exchanged and further agreements were made concerning possible European collaborations. 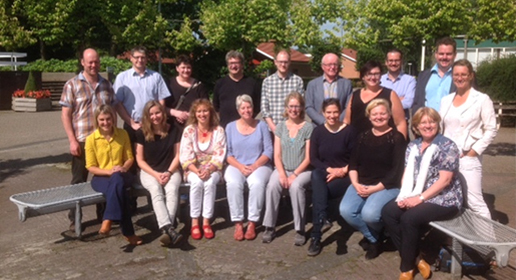 Coaching professionals was a topic which was addressed both, in Belgium and in Germany.
On the one hand Filip Morisse’s dissertation, and on the other the development of a seo-curriculum by the Bethel foundation, led by Marieke Conty.
In this dissertation, it was examined whether a team of facilitators could be made more sensitive in order to mentalize and reflect on what they think this certain client feels by employing a variety of tools and techniques. Solution oriented skills seemed to offer the best results.
The seo-curriculum is addressed to caregivers working with people with ID. It consists of actual training in the workplace with video analysis, where in addition to a general part of developmental psychology, every phase is addressed separately. This is a “training on the job” and will consist of different modules and last over several months.

Two books were also written. ‘Das Alter Gefühle’ (“The ages of emotions”), written by Tanja Sappok and Sabine Zepperitz (Hogrefe-Verlag), is already for sale in bookstores in Germany. It highlights how an intellectual disability is not purely a cognitive problem, as (social) emotional development can be delayed or inconsistent as well. This creates an increased risk of serious behavioural and psychological disorders, which can lead to far-reaching consequences such as avoidable hospitalizations, high psychopharmacological treatments, loss of work and living space to even an exclusion of the society. The book offers a theoretical part, but also includes a lot of practical tipps and guidelines.
The other book (written in Dutch) is a manual about emotional development and will appear in November 2016, which contains contributions by, amongst others, Jolanda Vonk, Anton Dosen, Filip Morisse, Paula Sterkenburg, Tanja Sappok, Els Ronsse, Angelique Peters, Stijn Van De Velde and Mieke Hoenderboom. It provides an up-to-date overview and understanding of the principal (academic) achievements in this field. It also contributes to a better understanding of emotional development and strengthens the scientific foundation of care.

From Paula Sterkenburg’s group, Wendy Engelbertink gave an example of how therapy can be linked to emotional development. Her presentation named Integrative Therapy for Attachment and Behaviour at Twentse Zorgcentra.

Paula Sterkenburg was also president of the symposium “the perspective of the other”
This was organised inside the NEED conference by Fortior, Bartimeus, and the care centres in Twente. The symposium focused mainly on how a scale can and can’t contribute to taking the other’s perspective. There were presentations by Tanja Sappok, Leen De Neve, Filip Morisse, Jolanda Vonk, Angelique Peeters; Joan Vermeulen and Xavier Moonen.